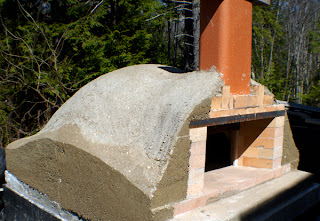 Brick oven domes need insulation in order to retain the heat transferred from the fire to the dome bricks.
This can be high-tech fiber insulation or a composition of vermiculite.  In the case of ovens where the final profile is a dome, vermiculite and Portland cement are combined to form a layer that is both insulating and solid. The mixture is troweled on and shaped, in some cases using forms on the side to increase depth or shape the final oven style.

Note that a tremendous amount of moisture resides in the vermiculite/cement layer and needs to be slowly released when the oven is 'seasoned'.
Alternatively, a steel frame can be built that will support stucco or stone-faced walls and a roof allowing for the 'box' to filled with loose vermiculite. 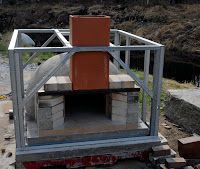 Once the oven is finished none of the frame needs to show and the outside of the oven is cool to the touch even when the inside temperature is 800 degrees.