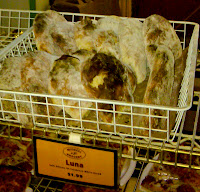 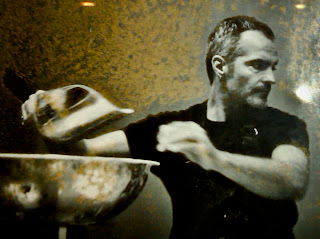 There are bakers and bakeries and there are BAKERS AND BAKERIES. Whenever I was in Portland, Maine, I stopped into Stephen Lanzalotta's bakery, Sofia's. There I discovered that transcendent bread (in the form of Lunas) and remarkable pastries DO exist.
Prior to my forays to Sofia's, I never imagined that pepper had a place in confections or that confections don't have to shout SUGAR to get your attention. What I have learned since is that Stephen is perhaps unique among all bakers.
Before my first trip to Italy in 2006, I asked Stephen where I might learn Italian and he steered me to Paola D'Amato at the Institute for Italian Studies in Portland (www.iismaine.com/) 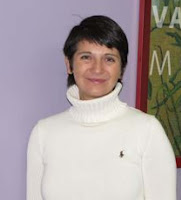 Born and raised in Trieste, Paula guided me and the other students in conversational and written Italian. Having had a solid base in Spanish I managed to morph with the intermediate class and arrived in Italy that November ready to adventure into the countryside.
For the last twenty years Stephen Lanzalotta has played with the idea that there are inherent ratios in nature, including the “golden section,” and if you obey them, good things will happen. He has baked his bread using ingredients measured to certain ratios that he believes were discovered by ancient Greek and Egyptian mathematicians, and which have been used throughout the ages by the great artists, architects, and inventors — indeed, which he uses in his own paintings, exhibited at Sophia’a and another Portland art gallery.

When Sophia’s bread sales dropped precipitously during the Atkins diet days, Lanzalotta fought back with a diet that he concocted using his numerological techniques, and for the past three years he has been lecturing his bemused customers about his ideas. The popularity of Dan Brown’s Da Vinci Code gave him another opportunity to popularize his theories, and helped him land a book contract for a diet book to be published next April by Warner Books (pictured).
Lanzalotta recommends 20% protein, 52% carbohydrates, and 28% fat (see diagram below), deriving these percentages by “linking together exponentials of phi.” Phi (φ, pronounced “fee”) is the number 1.618, the so-called golden ratio.
Other numbers incorporated in Lanzalotta’s diet are 144 (the dozen dozen), 360 (the optical plane), 432 (the Vedic earth revolution age), 666 (the number of Mephistic planes in the Louvre pyramid), and 756 (the length in feet of the great pyramid of Khufu).

Lanzalotta, who used to turn out 60 different kinds of bread at his Sophia's Bakery in Portland, downsized about four years ago and set up shop in Micucci's to focus exclusively on the pizza (and a few other specialties including flaky sfogliatella, focaccia, and a hearty seed and nut loaf produced only on Fridays).

It so happens that Micucci's Grocery (a REAL Italian grocery) www.micucci.com/ has been my favorite store in Portland for the 40 years I've lived in Maine. Now I can stop in to smell and buy the piquent cheeses and salamis in front and wander past the pasta and wine racks to the baker for some of that amazing food that Stephen Lanzalotta turns out with spellbinding regularity.
Thanks to the writers at calorielab.com for the review of The Diet Code and to Paula at the Instituto for helping me enjoy Italy.

Posted by David Neufeld at 6:49 PM