Sixteen years ago, I was part of a team of three designers who helped the Maine Organic Farmers and Gardeners Association turn a 35 acre potato field into a living, breathing fairgrounds.

Many of the aspects were collaborations between the designers and the long-time staff and volunteers of the many previous fairs that took place on rented fairgrounds. 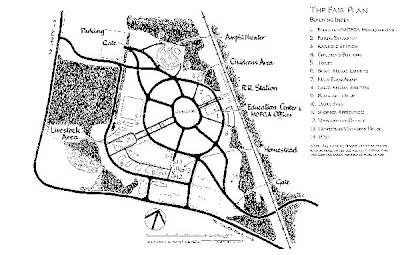 The site is now as we envisioned it: a place for thousands to enjoy a weekend of statewide gardening and farming community life and a year-round place that demonstrates and hosts homegrown lifestyle events.

However, there is one place that I personally designed in response to the availability of 200,000 cubic yards of material that had to be removed to build the paved roads around the fairgrounds.  That's a lot of dirt (fill).

The fair wanted to site the 'Spotlight' stage in one corner of the grounds, its back to the woods and the music facing the larger acreage of activity.  I suggested a crescent-shaped berm, perhaps fifteen feet high that would form an amphitheater AND block the sound from bleeding into other fair activities (as it had on other fairgrounds).  The quantity of fill available wouldn't have to be transported very far, a separate space would be created, and the highest point in the fairgrounds built. 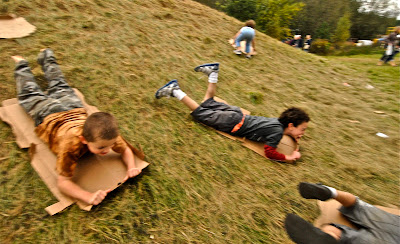 What I hadn't planned (and this is the design bonus) is that hundreds of children would annually use the back slope as a sliding hill, using flattened cardboard boxes as toboggans.  It is like January in September without snow or snowsuits and the parents can stand at the bottom and enjoy each others company while their children burn surplus energy.

As is my landscape design work, see northstarstoneworks.com, the design bonus of well-planned brick oven projects can be unexpectedly joyful.
Posted by David Neufeld at 9:28 PM