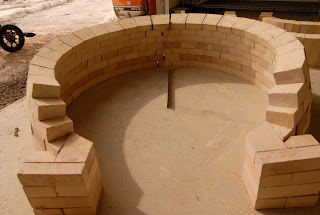 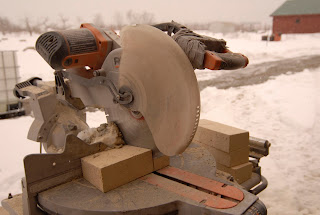 Work has begun on the 54" interior dome oven for Pie Tree Orchard in Sweden, Maine.  Since the land is still covered in snow and the temps are near freezing, I did the initial work pre-cutting the custom dome bricks for later construction of the oven.

In the past, I have used water to cool and lubricate the saw blade.  I've done this by either soaking the bricks in a barrel of water or applying a mist spray to the brick as it is being cut.  This also cuts down on the dust produced by the cutting process.

Here I have used a current and local resource to cool the saw blade: snow.  Chunks of snow set behind the saw blade and held against the blade on the side of the brick have worked perfectly to cool the blade, making it last longer and cut efficiently.  Fortunately, the cutting area is set on a southern exposure in temps that have been in the mid-30's, warm for Maine.

This is one of the many projects Pie Tree Orchard is initiating to make it a comprehensive net-zero energy farm.
Posted by David Neufeld at 11:12 AM