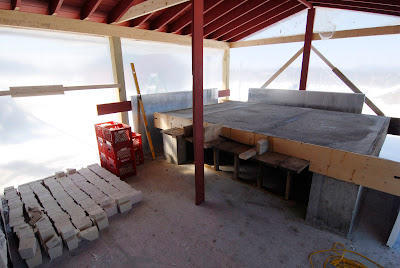 About 600 individual bricks will create the dome for the 54" interior dome oven at Pietree Orchard www.pietreeorchards.com. 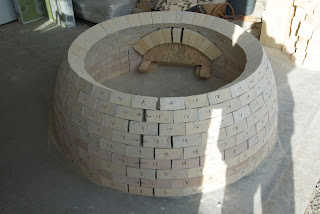 Pre-cutting the bricks indoors has given me a jump on the late winter weather in Maine and the project and bricks have moved into the space where the oven will be built (enclosed and heated to 50F until outdoor temps moderate).

Having done the work of fitting bricks dry, it made sense to number them for re-assembly.

I have also laid out the dimensions of the oven on the concrete slab.  Scribing lines for flues and dome allow me to accurately plan the depth of the spaces needed for auxillary masonry such as warming shelves and exterior insulation.

A sub-floor of firebrick has been laid upon which the second layer, herringbone pattern, will be set for the finish  floor of the oven.
Tune in for part 3 next week.
Posted by David Neufeld at 9:31 AM