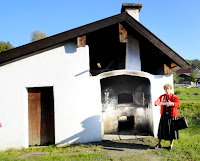 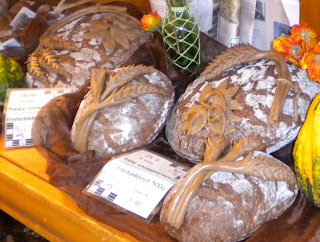 Just a short post to show an oven in Bavaria visited by Beth Hayes recently. It is interesting to see the similarities and differences between ovens in various European countries. In this instance the flue for the oven is the entire workspace in front of the oven, thereby making the wall smoke-blackened. Clearly, most of the baking was done in a semi-outdoor environment, unlike the Pompeii bakeries which were inside a building.
Then there's the bread.  With customary Bavarian decorative extravagance, the loaves have been adorned with wheat and leaf motifs, which were glazed (likely with egg white), begging that age-old question (often associated with birthday cakes); which do you eat first, the decoration or the bread?
Thanks Beth for the photos.
Posted by David Neufeld at 4:08 PM