The town of les Ezyies in Dordogne is known for it's Musee Prehistoric, where one can see evidence found under the cliffs of the inhabitants of 20-30 thousand years ago. 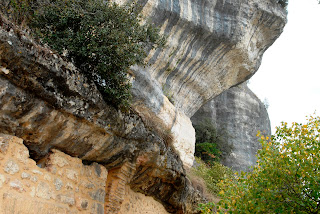 Listening to the guide describe the fire-pits and the minimal shelters of that era, I turned and looked up at the cliff and sky, the same that those humans must have seen. There above me on the scree slope of the cliff sat a brick oven.
A difference of 40 feet of elevation and 20,000 years and cooking had improved remarkably along with shelter, food, and transportation, not to say anything about clothing! After her talk, I asked about the oven. 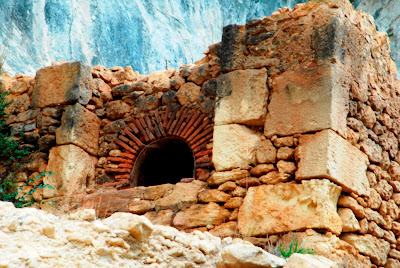 Even though her specialty was prehistory, the guide unlocked the gate, brought a ladder out and we climbed the crumbling hillside to the mouth of the oven.
History has it that the dig she had just explained was uncovered in the 1940's because prior to that the farmers who owned the land didn't dig very far into the hillside. Apparently though, the FOUR (oven) was older than the time of the Bateau family; she said it was likely a 'peasant' oven from earlier times.
As the photos show this oven is very similar to others I have seen in Italy and elsewhere.
But..."stay tuned", as tomorrow's blog will show a working oven in the town of Urval know as a Four Banal or literally translated "Common Oven". This community oven is still in use for festivals.
Aurevoir amis
Posted by David Neufeld at 12:11 PM