"Pizza" is what I often hear when people see my oven. True, many of the ovens I've built are used by caterers and chefs to make pizza, that uniquely ubiquitous American main dish that has been re-imported to countries around the world under a number of brand names.
But BREAD...that's the real reason behind this great invention that rivals the wheel as a crowning achievement for homo sapiens.
Bread is mentioned throughout history and in the Bible as the core food of human existence and also as our metaphorical spiritual food. 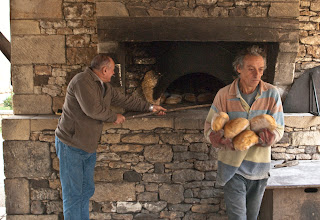 We break bread together in friendship. at the end of the week, in ceremony.  We cut pizza at parties...with beer.
My visit to France confirmed bread's place in communities as I visited with a baker in a small country town. On a cool October morning the oven was fired, the bread dough rose, and finally the loaves were placed in the oven prior to a farmers' market at noon.

Returning home, I told myself that I would attempt a similar tradition in my small community, that of baking bread weekly and inviting people to join me as the loaves were finished, breaking bread together and perhaps sharing some cheese and wine (referred to as the French Trinity).

More on the results later...
Posted by David Neufeld at 9:05 PM