Most brick oven domes begin with a straight course of vertical bricks so that the perimeter of the oven has the space needed for baking and for a live fire.
By cutting 4.5" by 9" by 2.25" fire brick at an angle through the middle of the brick, I get two identical bricks for the first course that provide the initial angle for beginning the dome. 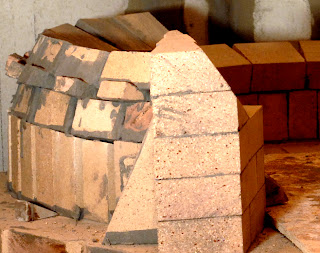 Over time, I have found that a whipped-cream consistency of high refractory mortar lets me dip the edges of the bricks into a mortar bucket coating the bricks with a thin and even layer of mortar. This speeds up the process of applying mortar and laying the courses.

There is a 'middle process' that accompanies the first courses of the dome: the eventual arch supports for the mouth and throat.
These will addressed in the next blog in detail as they require some planning and may be built simply or elaborately. 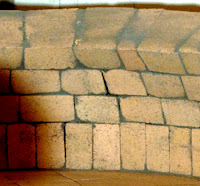 The second course is laid flat against the angle of the first. From there up, pre-cut firebrick wedges and pre-cut angles on each brick provide tightly fitted joints. The wedge shape of each brick locks each course into place giving the dome an almost indestructible shape while allowing expansion and contraction to act in all directions at once.
Posted by David Neufeld at 4:36 PM