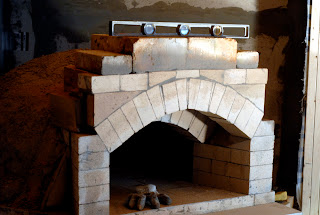 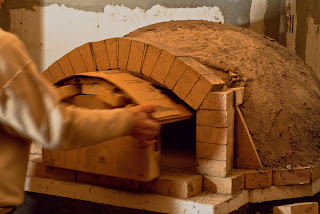 In this oven, the same form was bulked up with blocks so that the identical arch could be extended outward to support the bricks at this larger and higher dimension.
Shims raise the form off the floor and a layer of cardboard makes removing the form after mortaring easy.

Full length firebrick is cut to form corbels, a stepped-in series of bricks that take the wide opening of the throat and bring it to its intended 9" by 8" dimension.
The next step in this oven will be constructing a flue channel that runs over the top of the oven so that the chimney, when installed, is set back from the face.
Posted by David Neufeld at 8:21 PM