I came upon Alex Chernov's website stovemaster.com while researching the best ways to build custom brick ovens.  His company is out of Toronto, Canada, a 'fair piece', as we say in New England, from where I live and work. The precision with which he builds his brick domes confirmed that with the proper angles and equipment, I could cut dome bricks so that they fit perfectly on all mortar joints.  This involves a lot of cutting but results in very small mortar joints and an entirely structural unit. 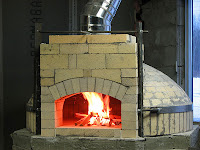 Most of the domes illustrated elsewhere (and many of the ones I've built until now) use refractory mortar as filler where large spaces around bricks need to be filled. This does not decrease the strength of the dome significantly but the result is not aesthetic perfection.  Alex's method is.
My hat's off to Alex.
Future truebrickovens.com domes will be assembled from precision-cut bricks based on a CAD design I hired a CAD technician to produce.  Sometimes a computer nerd is really handy.
Posted by David Neufeld at 3:21 PM