Expanding the use of any appliance we have makes that device both more economical and the space that it occupies for efficient.

Since brick ovens are also beautiful objects capable of cooking most foods, smoking food in them gives us yet another reason to build one.

Smoking in a brick oven is simple.  The fire we build, as we would if we were heating it for pizza, is allowed to burn until the dome temperature just reaches baking temp (400F).  The coals are pushed to the back of the oven and a chunk of apple wood (or any other fruit wood available) is pushed against those coals.

The food is placed in the oven in a tray and the oven door is shut.  Depending on the meat or fish being smoked, the work is done until the meat reaches safe temperature for consumption. 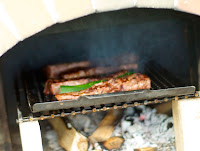 Smoking food while grilling is even easier since the flavors of the food are determined by what green material you place on the coals.  I have used apple tree trimmings, rosemary sprigs, and hickory chips.
Posted by David Neufeld at 5:23 PM