What are the sources of foods we cook in a brick oven?

As the movement toward locally sourced foods and 'slow food' grows, we can work in reverse, from what we like to cook, towards what we want to grow ourselves.

For brick oven bakers, herbs, tomatoes, mushrooms, and poultry might be among the top items in these food groups.  One might add cheese if a nearby source of raw milk is available. 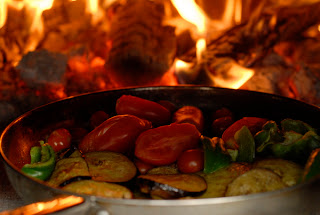 The simplest products would be garden vegetables.

Around March 1, avid gardeners begin to anticipate the growing season in most climates in the northern hemisphere.  The sun is strong and, with luck, winter has released its grip on the soil.  Even in New England, a cold frame or small greenhouse allows us to start greens and harvest herbs.

This is certainly seed arrival time.

Of the vegetables most likely to make it into a May brick oven event, I'd list: new growth on perennial herbs such as thyme, sage, rosemary, chives, and oregano.   Spinach, cilantro, and newly dug parsnips grown in the previous season and left in the ground to sweeten, will be current. 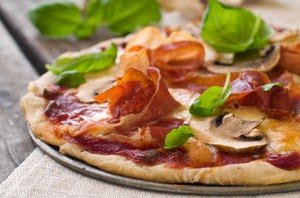 Unless you live in a warm climate, it's a fair wait until the classic vegetables: tomatoes, peppers, eggplant, zucchini, and basil are mature.  Bridging this gap requires that we look elsewhere.

By summer, for omnivores, locally caught fish, locally raised poultry, beef, and pork, and cheeses can supplement the spring vegetables.  Generally, Mediterranean cultures, especially the peasant populations, did not serve huge chunks of meat as the central dish.  By using meat as an element within the dish, buying and cooking local, organic, or naturally raised meats doesn't have to result in more expense.

By July, a well-tended garden will have an abundance of vegetables.  The brick oven, fired up on the weekend, will still be hot enough on Monday, Tuesday, and Wednesday to cook a variety of dishes.  The journey through the rest of the season is one long culinary festival.

Posted by David Neufeld at 2:08 PM