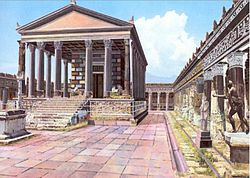 "VENITE A POMPEII" a local real estate broker shouts in Rome.  "There is an amphitheatre, a palaestra with a central natatorium or swimming pool and an aqueduct that provides water for more than 25 street fountains, at least four public baths, and a large number of private houses (domūs) and businesses. The amphitheater has sophisticated design, particularly in the area of crowd control." 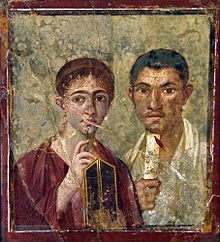 "Molto importante "  Crowd control.  11,000 people lived in Pompeii on the eve of its destruction, the usual mix of rich, tradesmen, and (in a separate ghetto) serving class.

"A 'bella vista' of the 'montagna di fumare' Vesuvius."


On 5 February 62,[13] a severe earthquake did considerable damage around the bay, and particularly to Pompeii. It is believed that the earthquake would have registered between about 5 and 6 on the Richter scale.[14]
On that day in Pompeii, there were to be two sacrifices, as it was the anniversary of Augustus being named "Father of the Nation" and also a feast day to honour the guardian spirits of the city. Chaos followed the earthquake. Fires, caused by oil lamps that had fallen during the quake, added to the panic. Nearby cities of Herculaneum and Nuceria were also affected.[14]
Temples, houses, bridges, and roads were destroyed. It is believed that almost all buildings in the city of Pompeii were affected.
In the days after the earthquake, ANARCHY (shades of post-apocalypse fiction) ruled the city, where theft and starvation plagued the survivors.  Crowd control fell off. 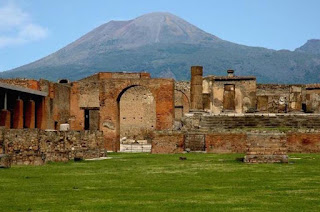 Today, Pompeii on a sunny day is a lovely place to stroll through.  Not uncovered until 1599, the city's plazas and avenues feel as new as they might have been when the Romans took over the city just 160 years before its destruction.  This is just about the age of our current Los Angeles, California.  Among the favorite tourist features are the macabre plaster casts of the bodies of inhabitants in the positions of death when they were buried beneath fifteen feet of volcanic ash on August 24, 79CE,  the day the real estate bubble burst.