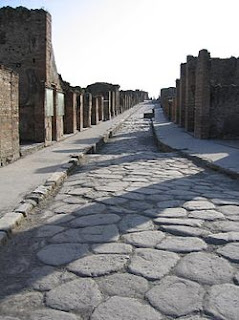 I visited the excavated city of Pompeii last March. It far exceeded my expectations. As one of the most visited sites in Italy, it was still possible to be on a street within this brilliantly designed metropolis and be alone.
Pompeii had more than two dozen bakeries operating until Vesuvius blew in 79 CE.  At the time, I had already built a number of 'Pompeii' style brick ovens and was curious to see the real thing. What I observed and came to understand, was that these bakeries were high-production. Doing the math, a city of 50,000 requiring daily fresh bread from say 25 bakeries meant that the ovens were baking hundreds of loaves a day. I understand that some wealthy families had their own bakeries. 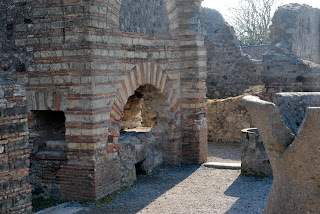 The design of the oven openings is curious. Note that the flue occupies the entire area above the oven mouth. Yet, at each end of this open shelf space under the flue, there are openings.

I conjecture that bread handlers were setting rising loaves on boards in from one end and removing them from the other, or some other means of speeding up the management of baked product.  These side spaces may also have served as rising areas for breads prior to baking.
All of the surviving ovens I saw had this feature and none of the ovens built later in small communities and in private villas in other parts of Italy showed this same feature.

A currently-built brick oven bakery might employ this same design.
Posted by David Neufeld at 11:54 AM