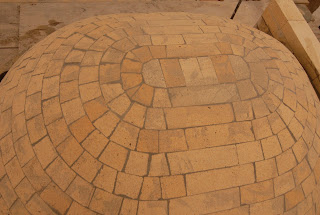 I just returned from St. Charles, MO where I constructed an oven core in preparation for the masons to build the summer kitchen.

It was a whirlwind project and the weather cooperated, starting chilly in the mornings and ending with temps in the high 60's F.

Thanks to Tim and Rick of Frisch Masonry for their expert assistance and friendship. 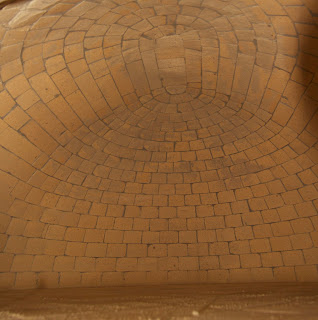 The long dome got us thinking about this 'stretch' version of the Pompeii dome being adaptable for not only narrow spaces but shallow spaces, with the mouth positioned on the long side rather than the end.

This oven is 48" wide and 60" long in the interior or think of it as a 48" dome with a 12" straight section in between the two halves of the dome spliced into the adjoining bricks for strength. 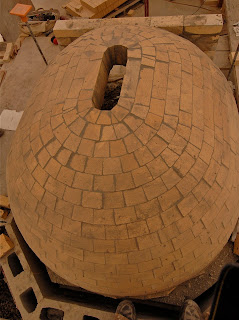 The Roman keystones that close the final space at the top were actually easier to place than the classic eight-sided keystone of a round dome... but just as satisfying.
Posted by David Neufeld at 10:00 AM