I've posted a few times on the 2 meter brick oven in Audrix, France, which I have visited a few times and which is fired every Tuesday morning for a noon market. 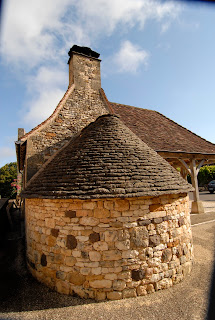 The baker arrives with two large tubs of rising bread dough and within 3 hours has the oven fired to temperature and 60 or so loaves baked to perfection.  This in an oven that has no apparent insulation.

The method used there is called (in English) 'spiking'.  It is when just the surface of the interior brick is brought to baking temperature and the baker moves only one batch of bread through the oven before the heat has migrated farther into the brick dome and floor. 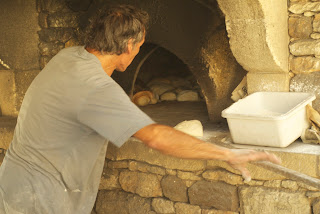 A north American adaptation of this would use cabinetmakers scraps of hardwood (off-cuts and ends from cherry, oak, maple no larger in diameter than 1")

The second technique I observed is a very fast introduction of the loaves.  The Audrix baker, Jose, was able to cut, form, and load 60 loaves in about 15 minutes.  With the oven door shut and the oven FULL of moist bread loaves, the dough produced large quantities of steam without additional introduction of misted water for the steam that makes a fine crust.

Spiking is useful on a small scale or residential oven when you have only a few items to bake.
The key is dry material and fast release of BTU's.
Posted by David Neufeld at 5:04 PM