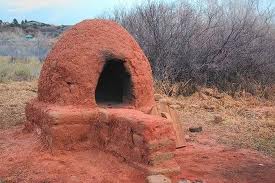 Somewhere in the haze of ancient wood-fired oven use some clever baker came up with the idea of adding a flue and chimney to the face of a mud oven.   Bread could then me made without the threat of rain or dragons. 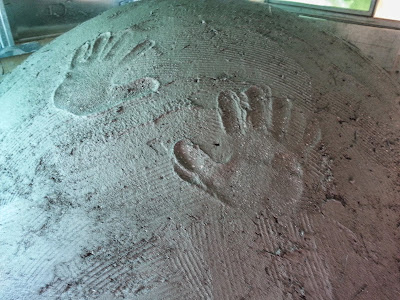 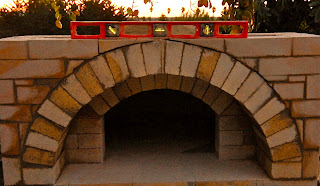 Later, maybe a thousand years, maybe the next day, bricks were invented and used to build the interiors, giving the oven a long and crack-resistent life. 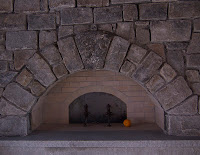 Fast forward to the beginning of the Common Era (A.D).  Roman cities had sophisticated brick ovens going 24/7 (Roman Calendar).  The ovens were domed; the mouth rectangular; the face a large arch giving the bakers ample workspace, and the flue huge.  One other detail that I observed two thousand years later was an opening at either end of the front.  I have conjectured that these were to facilitate the introduction and removal of boards containing bread loaves.

It stands to reason that in the two thousand years since, some improvements would have been made to brick ovens.  There have been.  Relatively yesterday, insulation materials were added to the exterior of brick ovens to retain the heat and conserve fuel.

Gas, oil, and coal were employed as fuels.

But as the industrial age met the commercial age and the commercial age mated with the marketing age, the brick oven slipped backwards.  Large manufacturers cast domes from concrete (of highly varying quality), the mouth and the face of the ovens are parallel, making visual and physical access to the entire dome impossible, and segmented domes created vulnerabilities that would result in planned obsolescence.

As a custom builder, my first point of reference is history.  What did builders discover over the first three thousand years of brick ovens that I could not improve upon?  What observations have I been able to make as both a builder and baker in brick ovens?

#2 Access.  All of my ovens have a face that is bigger than the mouth.  This means that the baker can SEE and REACH all edges of the dome.  This is more like the original Pompeii ovens.

#3  Combustion Air.  All my indoor ovens have channels that supply the air needed for good burning of fuel and good draft.

All three of these features are unique to my ovens.  Given the visibility of this information here, why wouldn't the BIG manufacturers incorporate these features into their ovens?
The only answer that comes to me is that they have the molds, the advertising, and the business model that is ostensibly working and they need not improve their products.

Going forward, if I see an opportunity to improve my ovens, I take it.  As owner builder, with both the customer and product foremost in my mind, I have the flexibility to alter my design as needed.
Posted by David Neufeld at 9:19 AM