Last Thursday I teamed up with a local Italian guy (thanks Angelo) to make pizza for varsity team captains at a private academy nearby.
I rolled my portable around to the location for the end-of-year celebration and fired it up.  Some of the students who plan on building a brick oven as their senior project came by to observe and ask questions.
When the oven temp reached 750 F we started turning out 2 minute pizzas...which were promptly woofed by the hungry captains. 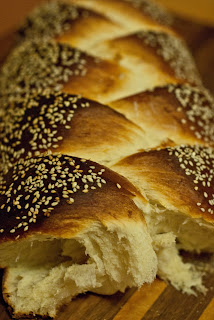 Afterwards, I towed the oven back to my place and 5 hours later slipped a Challah (bread that is traditionally baked for the Jewish sabbath). into the 537 F oven.
The next morning the infra-red thermometer read 356 F.  24 hours from first firing the oven was 238 F.
38 hours from firing: 185 F and 144 F after 50 hours.  60 (sixty) hours after the initial pizza party the oven was still 126 F.

Brick ovens that are well insulated take an armload of wood and convert it into almost three days of cooked meals.  After 4 years of building and cooking in these ancient devices, I'm still amazed at how "green" they are.
Posted by David Neufeld at 6:03 PM