A Wood-fired bake oven from Adobes

Just before the pandemic hit, I was over the border in Mexico with an old friend I hadn't seen in almost 40 years.  The man has everything, a beautiful family of five with his Mexican wife, a handmade round adobe house, the respect of his community, four old Volvo's kept going with spit and piano wire...

What could I give him?

Just up on street, down another, on the edge of town, is an adobe maker, a woman in her fifties turning out hundreds of adobes a week.  They are laid out on edge drying in the sun; later, they'll be stacked in a scove (a rectangular pile that is both the adobes and the kiln) and fired to maturity.

Our goal, my friend and I, was to build an oven with the least possible cost and of local materials.  We chose green (unfired) adobes.  These would be easy to cut, the very mud that they are made from would serve as mortar, and they were cheap.

We also had limited space and an existing barbecue platform (next to the wood-fired hot water heater). 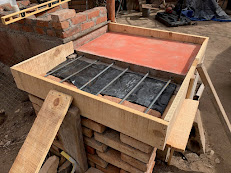 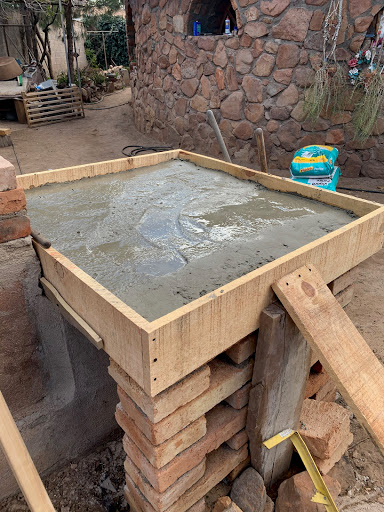 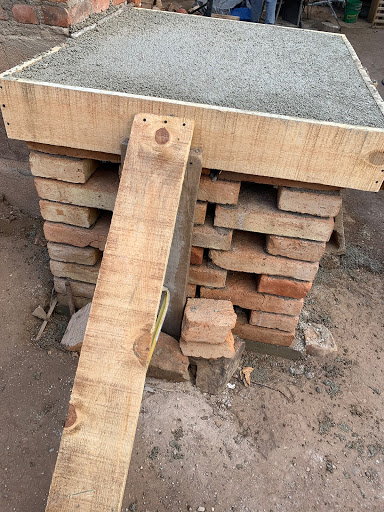 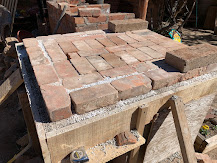 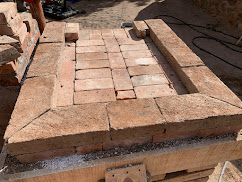 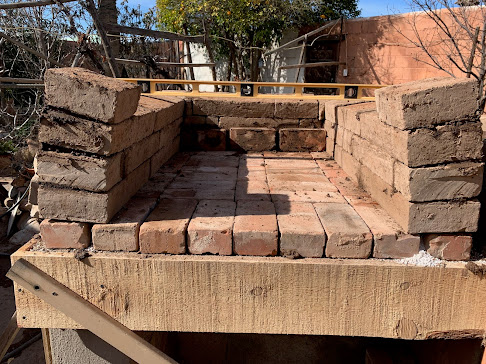 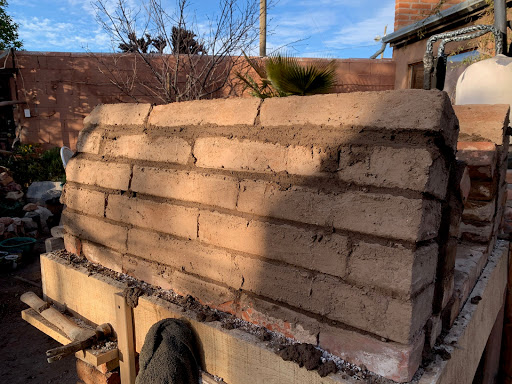 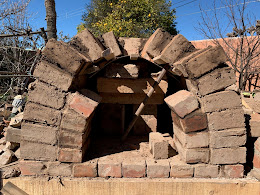 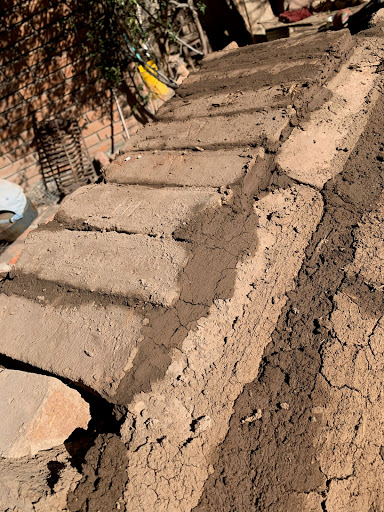 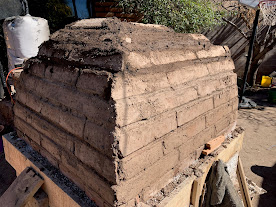 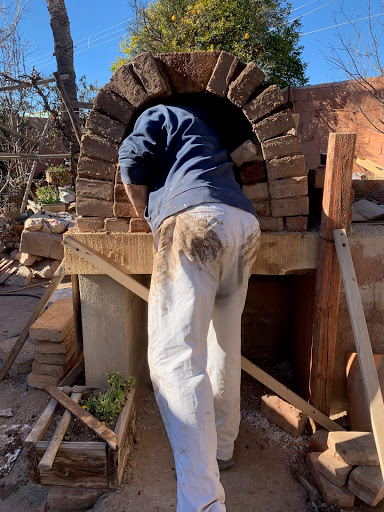 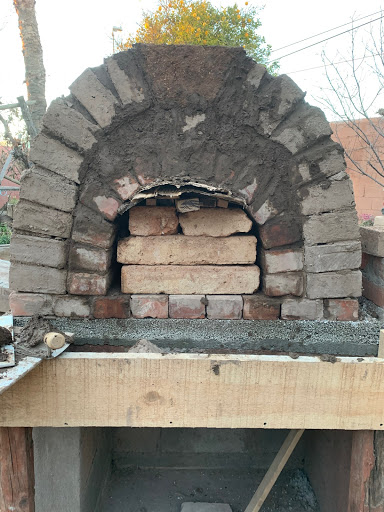 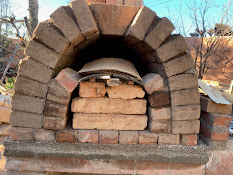 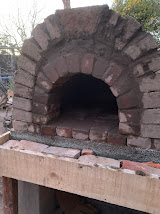 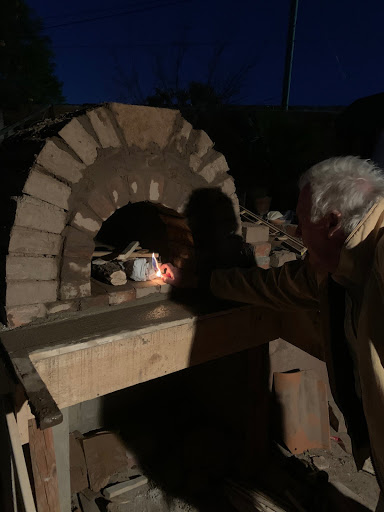 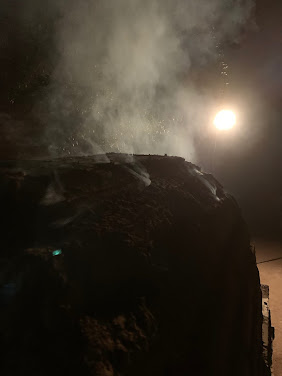 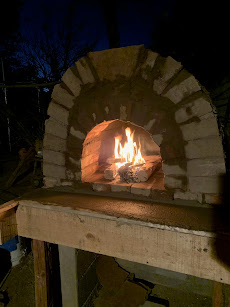 It is possible to build a partially brick oven.  The reasons vary; you cannot afford the materials for a full-on brick oven, you like cob ovens but want to strengthen the mouth and provide a chimney, or some other local material could also work.

I have encountered and worked with these variations.

Stay tuned for more detailed posts on the above.
Posted by David Neufeld at 2:08 PM 1 comment:

The Future of Brick Ovens

The title of this blog suggests I know the future of brick ovens; I don't.  In the fourteen years I've been building traditional brick ovens, wood-fired ovens have become increasingly popular.  The result being that there are hundreds of 'models' to choose from; ranging from castable shells to lightweight steel fire chambers in a full range of prices. 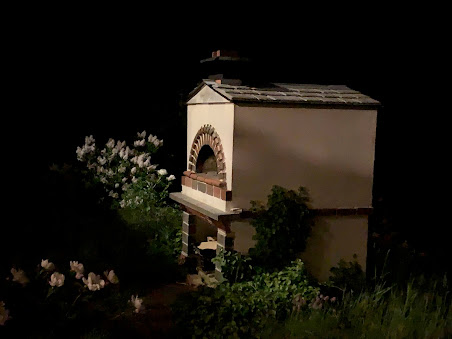 It is fortunate that a small percentage of the people who want to cook in a wood-fired oven have chosen to build an actual brick oven, either themselves or by others.  And despite the nearly two years since my last post, I continue to get calls and emails seeking advice.  It has been the intent of this blog to provide the best information on building so that good, properly functioning brick ovens are made and enjoyed.

So I'll start with five points that anyone lighting a piece of wood that will fuel an oven should consider:

Posted by David Neufeld at 2:19 PM No comments:

Where Have I Been?

Actually, I have both an excuse and an invitation: I have been consulting on owner built ovens extensively, including traveling to Spain to assist in the construction of a 4 meter square double chamber baker's oven.
I also built one just 25 miles from my shop in Maine with the assistance of two expert masons (How fun is that?). 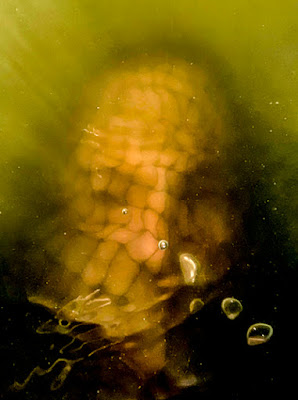 But, another reason stems from my wife's retirement and my spending more time with her.  I still take on projects that don't interfere with our schedules but far fewer than in the past.

AND, I here introduce you to a photographic project that I am touring nationally: www.mergings.net

To all of my loyal blog followers: please take a look at Mergings; you may add that to your list of frequently viewed blogs, OR you may continue to sift through the 475 past posts for the information about building and using brick ovens.  Future posts will be written when new and essential details are added to the lot.

I still welcome questions about brick ovens and I have projects in the works for the future including continuing to bring my portable oven to the Kneading Conference in Maine.

A Bake with Daniel des Rosier 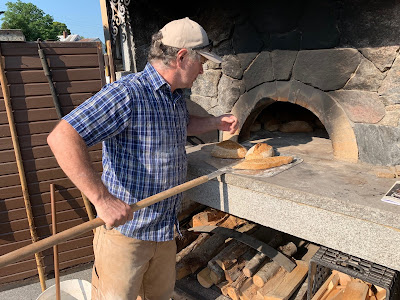 A couple of weeks ago at the Kneading Conference of the Maine Grain Alliance in Skowhegan, Maine, I managed my portable brick oven for Daniel des Rosier of Boulangerie des Rosier in Quebec (https://boulangeriedesrosiers.com/home/#). 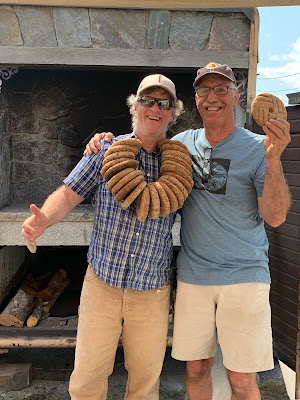 Daniel and his workshop participants started working earlier than anyone (5am) and continued through the three days culminating in a bake.


Because Daniel does not use a brick oven at his bakery, he depended on me to provide both the oven temperature and atmosphere and an oven that could accommodate multiple bakes on one firing. 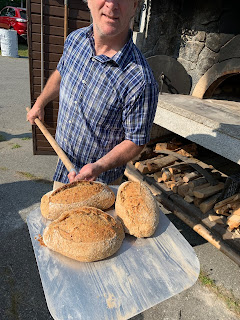 Without an undue amount of self-congratulation, I nailed it.  I don't generally due the baking in my family; I'm the fire maker.  Twelve years of experience firing brick ovens has honed my sense of the fire/temperature equation.  Add to this, my advocacy of building ovens with sufficient mass AND excess insulation and I make ovens that will satisfy a demanding (but fun) baker like Daniel. 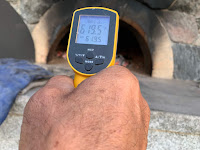 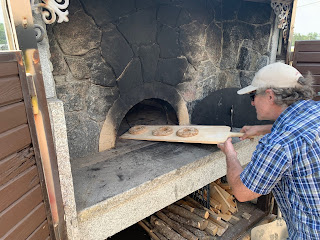 I was up at 4:30 on bake day having banked the fire the night before.  Daniel had the 520F oven for his four-batch bake of 70 loaves.  Throughout the day, I adjusted the oven for others, sometimes bumping the oven up to 700F for Kerry Altieri's focaccia and back to the 400-500F for more of Daniels breads.  We finished with pastries at about 380F.  A pleasure all around. 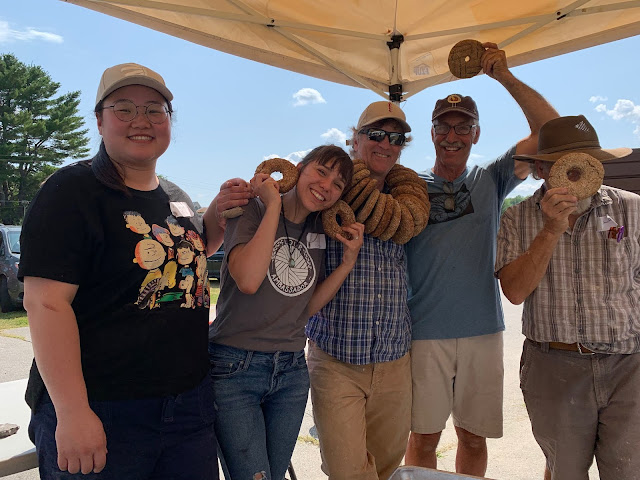 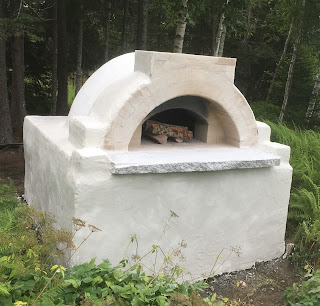 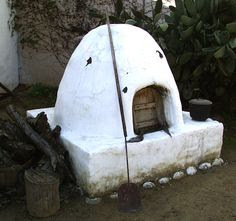 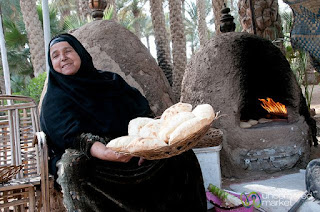 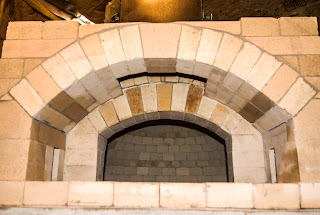 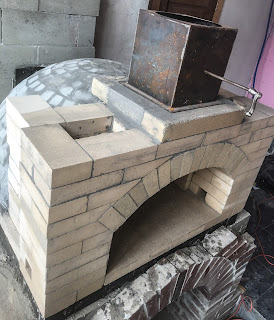