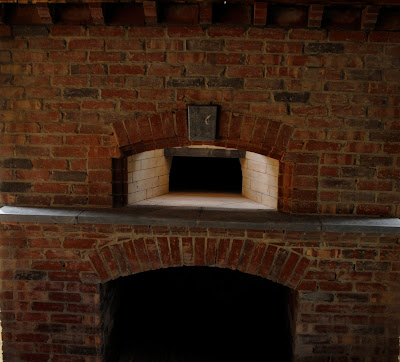 Aside from the internal design of the brick oven, exterior style varies dramatically from place to place.  A person's cultural experience contributes to how they imagine their brick oven looking.
When designing a brick oven face, I take into account the locality, the house or restaurant style, and the owners personal taste. 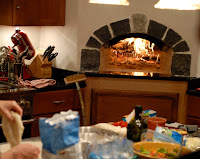 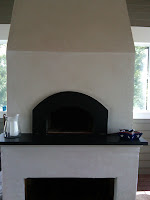 Most, if not all, of the ovens I build can find their design roots in some cultural context.
The accompanying photos show that both materials and usage of the materials determine the resulting look.
Posted by David Neufeld at 7:16 AM 1 comment: 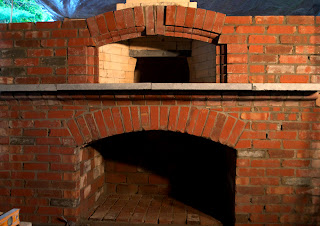 I recently was able to reuse the same arch form on two very different brick oven projects.  In addition, I used two-by lumber to maintain the plane of the face of each arch (and support a cantilevered brick shape until the shelf and wall above it were in place. 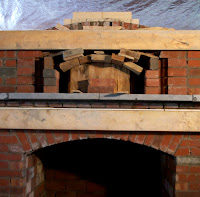 Forms can be varied and useful, whether for pouring a monolithic base, forming the structural slab or the insulating slab on which the oven is built, or for supporting masonry that will complete the facade of the oven.
Posted by David Neufeld at 11:16 AM No comments:

Construction of the dome where it meets the lintel still requires some custom cutting so that the dome bricks can continue to form the sloped surface that forms the shape of the completed dome.
Once the dome is complete, the lintels also support the chimney.
A decorative arch can be built in front of the face lintel.

I use angle iron lintels most frequently for portable ovens since the jarring of poor road conditions might damage or loosen a brick arch.
The domed ovens in France often had arched mouths and flat lintels over a large hearth.

The oven dome itself is a very integrated form and even after years of bouncing down country roads, my original oven is as solid as ever.
Posted by David Neufeld at 9:21 PM No comments: 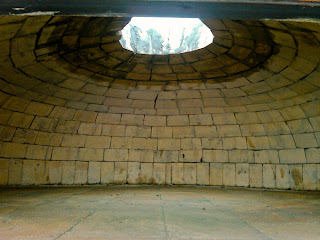 Each time I build a domed brick oven, I realize that I am spending a great deal of time and skill to build an ancient design.
The modern wood-fired ovens are by-and-large cast refractory or sprung arch brick ovens.  Each of these was developed when structural materials (castable refractory cement and iron superstructure) became part of industrial design.

The ovens I saw in excavated Pompeii were built without anything but brick. They have lasted thousands of years (and survived being buried under volcanic ash for centuries).

Having just finished two ovens this spring, I find there is a third reason for my effort: Domes are beautiful.

So each time I place the keystone at the top of a brick oven dome, I experience the satisfaction that artist and artisans feel when they put the last stitch or last stroke on their work.
These, all masonry ovens, will be around for centuries.
Posted by David Neufeld at 10:33 PM No comments:

A domed brick oven will have either an arched mouth or a mouth with a lintel.  The place where the dome meets the mouth can be the most challenging for home builders.

Decide on the arc of the arch mouth ahead of time and build an arch form accordingly.  Since I build brick ovens without forms, the arch form is the only one I need and I can reuse it in many ovens.  The arch in my ovens are two different width because the face of the oven is wider than the mouth.  This 'innovation' of mine gives full and easy access to all parts of the interior of the dome without changing the mouth-to-dome proportions.

Laying out the arch brick on a horizontal surface, accounting for minimal mortar joints lets you queue up before you mix the mortar. 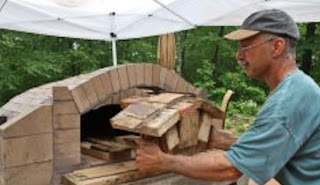 After setting the arch bricks in place with mortar, I immediately pull the arch form forcing the bricks to move minutely closer and insuring a good bond.
Notice the buttresses on the outside of the front arch.  Since the chimney will rest on top of this arch and the mouth arch, the sides need to have masonry containment.
Posted by David Neufeld at 8:36 PM No comments: