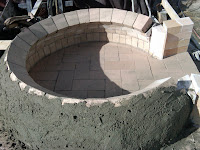 The floor of the oven is laid herringbone style with common firebrick and the dome bricks are cut from the same bricks.
Calculating (or drawing) the precise angle for the brick comprising each chain (the ring of bricks making up the dome) allows me to lay the bricks with thin seams. This strengthens the dome as each brick is locked into place while the mortar provides the seal and the adhesion needed to proceed rapidly. 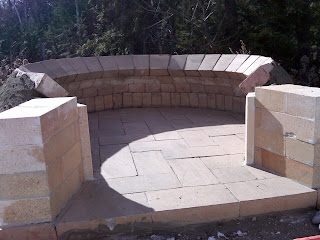 The mouth of the oven is angled outwards so that access to the products while baking is maximized at the same time as the mouth of the oven is kept to the correct proportion for retaining heat in the oven.
This is very similar to the bakery ovens I found on my visit to the excavated ruins of Pompeii, in Italy.

The vertical bricks act as a door-jam and will support angle-iron for the mouth opening (in the case of this portable oven) or an arch (when this design is a stationary oven).
Posted by David Neufeld at 12:01 PM 1 comment: 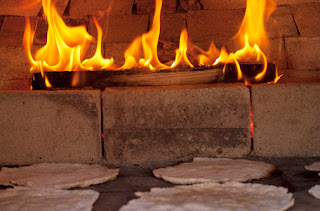 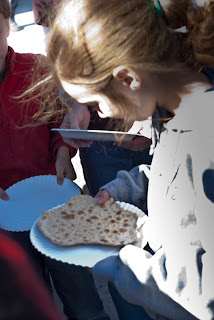 Matzah, the unleavened bread made by the Jews as they fled Egypt (see Exodus) was recently recreated in preparation for Passover.
Using Emer wheat (the variety grown in ancient Egypt) and my portable brick oven (a style modeled after the ones in Pompeii) the children and adults of Congregation Bet Ha'am in South Portland, Maine baked historic matzah. 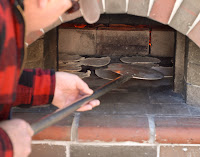 Eli Rogosa, of Heritage Grain Conservancy, brought sheaves of wheat from many regions of the world, which she has collected and grown.
Visit her website at: www.growseed.org.

<growseed.org>
The matzah coming out of the oven will appear on Seder tables Monday evening.
Posted by David Neufeld at 12:10 PM No comments: 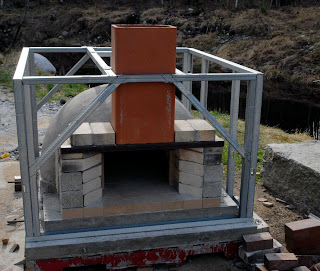 A steel frame allowed me to enclose the dome and add the maximum amount of insulation within the box.  The exterior was covered in backerboard and stuccoed with brick detailing.
Posted by David Neufeld at 12:03 PM 1 comment: 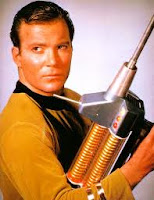 I remember my first big gas grill. I felt like Captain Kirk on the bridge of the Starship Enterprise. A console of space-age chrome and futuristic knobs awaited my command. I could sear six steaks or a slab of salmon at warp speed. The grill left the trademark grill-lines in the meats and the smell of burning fat wafted upwards. It was a good facsimile.

Like the arrival of white bread to universal praise in early 20th century homes, the gas grill heralded a new, less earth-bound era. Gone were the unpredictable and annoying skills of lighting the charcoal briquettes and getting an even burn.
So when did I lose the thrill? When did I fully come to grips with the disappointment of rusted grill bars and dysfunctional burner ports? When did I stop looking forward to hauling the canisters to the propane dealer?
I am a landscape designer and stonemason. Real materials, as old, and older than life on this planet, are my design elements. I enjoy growing a vegetable garden. I love fresh-baked bread and know how to make it.  I like pizza as do most Americans.
The grill died, transfer-station dead. I had a stack of firebricks, I had a mason’s skills and tools, and I had a plan. A true brick oven, the kind used for centuries throughout the world, could be mine for the effort.
We look back on our lives and mark the pivotal moments: kindergarten, first love, first car, first job, marriage, children, owning a house (not necessarily in that order).
For anyone who likes to cook, a brick oven will be a pivotal moment, akin at least to a first car.
It is the ultimate cooking ‘appliance’. It can roast, bake, grill, broil, slow-cook, fast cook (pizza in 2 minutes) all on one firing with very little firewood. But it is not a food processor. You will find yourself looking forward to using it. You will sit next to it. You’ll admire the flames curling under the domed ceiling, the age-old magic of wood and brick. Cooking will become ceremonial. 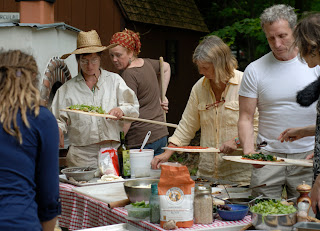 It is a social event. The oven itself becomes the focal point of a gathering, providing both exquisite food and a bright flame. No longer do I have to lure friends to a party with promises I can’t personally fulfill (“it’ll be a great time”). I just have to fire up the oven and the event takes off. I’ve seen people giggling over making their own ‘dream’ pizza from a table full of ingredients.  I get together with fellow bread-bakers and we shape and sample a dozen artisan breads, dipped in olive oil, slathered with butter, or just torn from the warm loaf.  I have cooked an entire Thanksgiving dinner in my brick oven; popovers to pudding. 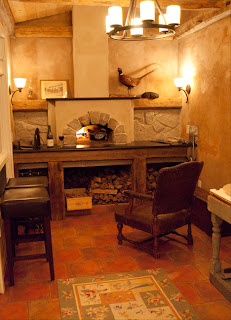 Whether the oven is outdoors, in a three-season room, or part of the kitchen, a brick oven is a timeless object. A brick oven will connect you to cultural roots you may not even know you have.
Like Rip Van Winkle waking from a centuries-long sleep, you will gaze at your gas grill as if you’d never seen anything so strange.  The brick oven will appear as if it has been part of your life forever, and it has. All of our ancestors cooked in these. In Europe, Asia, the Middle East, Latin America, Scandinavia, Africa, North America, with small differences, people have made their food in brick ovens.
The experience awaits us, forward, into the past.
Posted by David Neufeld at 2:04 PM 2 comments:

Italy vs USA: the world plate

A lot of people believe that a trip to Italy translates into daily feasts unlike anything possible in the U.S.
This is fortunately NOT true. What Italy offers is pure Italia, the whole experiencia: the land, the people, the culture, and the food. 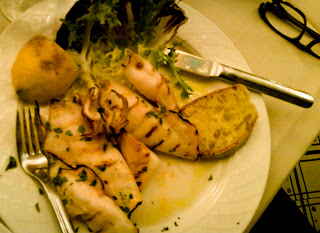 Without going into lengthy internet research, a restaurant food experience in Italy will net the same average of superb to okay as the U.S with one difference. In Italy they chop the meat and bones of hare and wild boar for sauces. The resulting ragu (a meat-flavored sauce) is full of razor-sharp bone shards that would thrill any settlement-seeking law firm south of Point Barrow, Alaska.
On the other hand, the Italians really know their tomato sauces. The subtlety of marinara and pomodoro was exquisite. There is no better place for cheeses and olive oils. Each region has its own local flavor and is proud of it. Sampling cheeses in a hilltown market makes an indelible mark on your food-memory.

In comparison, attentive chefs in three restaurants in Portland, Maine: Vingnola, Cinque Terre, and Ribolita make mouth-watering authentic Italian food that would be hard to stumble upon in most cities in Italy, and I'm glad for it.

Vignola and Cinque Terre feature locally grown meats and vegetables grown especially for the dishes on the menu. The wine list is personally selected by the owner and chef from the best available. 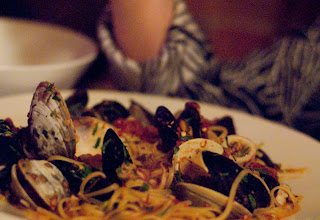 Ribolita has an intimate atmosphere and delicately flavored authentic dishes. Reading the menu, I was taken back to Siena. The names of the dishes directly translated into my experience of Tuscan food. 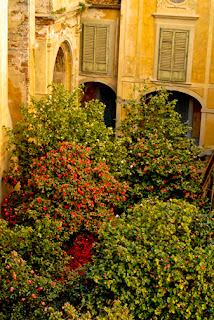 Granted, after dinner I could not take a stroll on Piazza Il Campo but I got home without a trace of jet-lag.

Bravo to any restaurant that holds to exacting standards. They are places where food-memory is alive.
Posted by David Neufeld at 3:23 PM No comments: 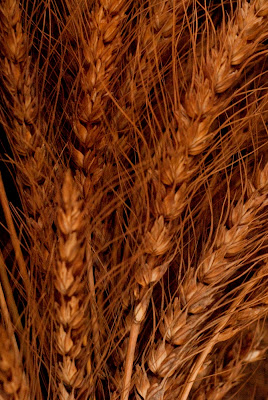 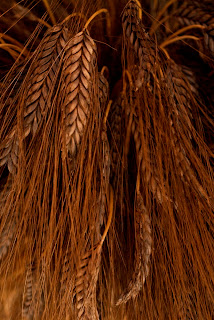 Imagine someone in the distant future trying to describe the wild places in North America after they had been transformed into homogeneous lots. Then imagine that the same person opened a window and you found yourself looking at the actual landscape. The grain of our ancestors was both their landscape and their life. I now have seeds of those ancient wheat to plant this fall.
Posted by David Neufeld at 3:26 PM No comments: