Brick Oven in my Conservatory

I've built two portable brick ovens for myself.  The first one, I gave to an aspiring young chef when I learned that she'd cooked in it every day for five months following the loan of it to her.
The second, the 'Audrix Model', I built after returning from the Dordogne region of France where I stayed in a hamlet associated with a chef here in the states with family there.
Both were featured and used at the 'Meet the Chefs' pavilion during the Northern New England Home and Garden Show each May.

Now, on the cusp of building a stationary one in the conservatory of my own house, I've just completed the greenhouse brick oven shown in a recent post.  In New England, where winters tend to prevent Mediterranean lifestyles, the conservatory I designed and built is intended to create the illusion of a gentler climate.

A real first snow fell this week making the prospect of building the oven imminent.  The design and  building of my own next oven will appear in posts over the winter.

I've mentioned my brick oven travels before to California, Missouri, West Virginia, New York, Massachusetts, Connecticut, and my nearby New Hampshire and Maine.  This week, I've added North Carolina to the list.  Will I get to all 50 states?  Unlikely.
Yet, these projects, often in contrasting locations and for diverse customers, give me a chance to build ovens for places as well as people. 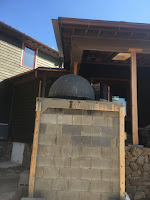 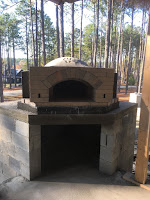 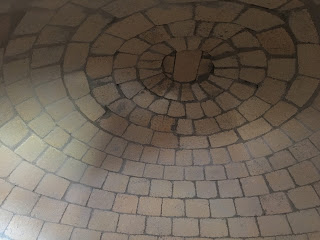 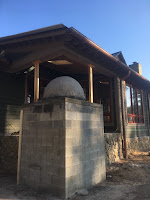 In this case, I've built only the core, that is the dome structure.  Coppersmiths and other masons will finish the exterior to the owners taste.

This dome will be covered (after insulation) with a copper dome.  I look forward to it's final appearance.  As with all ovens I leave before I get to test fire them, I direct the owner to the 'Operator's Manual' on my website.
Posted by David Neufeld at 3:40 PM No comments:

Of those wanting a brick oven, and those who also live in the northern half of the U.S., isn't it the wish to have a mild climate in which to enjoy the oven? 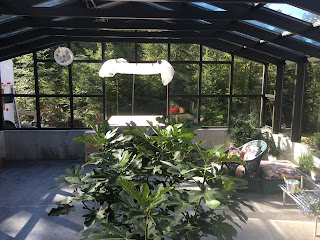 A customer of mine found the solution;  build the oven into one end of a greenhouse, fill the greenhouse with fig trees, herbs, and other Mediterranean plants, light the oven and 'Mangia!'

As is important when splicing a masonry project with any new building, I was brought in early, before the foundation was poured.  We planned location, access, size and style.

From there it has been a dance between the various contractors involved, graceful and on-time.

Here is the first half of the project.  Test firing and finals to follow. 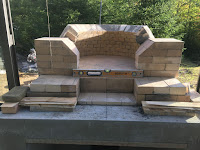 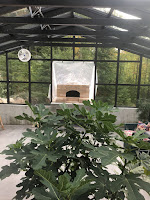 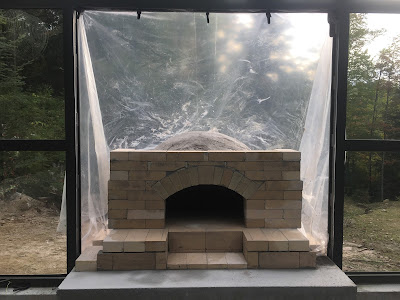 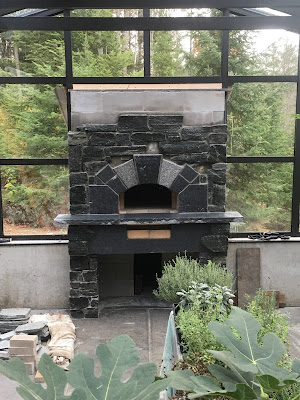 Although the overall stone veneer for the oven was chosen to match other stonework on the house, the face arch was left to me.  The design is meant to reflect the divided panes of glass, light and dark, that are part of the greenhouse structure.  It incorporates dark and light granite and an Irish limestone keystone, part of the owners diverse background.


The next post will show the finishing touches and the exterior building that encloses the oven dome itself with abundant insulation.

Posted by David Neufeld at 3:20 PM No comments: